Dartmouth, as one of the ports visited by the Mayflower in 1620, is part of the quatercentenary commemoration Mayflower 400…

400 years ago, the Mayflower Separatists from England and Holland undertook their historic journey to America – to settle and start a new life, free from persecution for their religious beliefs. The journey did not start well with the Speedwell, accompanying the Mayflower, proving leaky and having to put into Dartmouth on 12th August for repairs These were carried out to the satisfaction of the Master and both ships set sail on 23rd August. However, on 26th August, 100 leagues beyond Lands End the Speedwell was again leaking badly and the ships put back to Plymouth where it was decided to dismiss the Speedwell and proceed with the other ship. The Mayflower finally set out on 6th September, having lost some 24 days of precious time late in the season. They arrived off what is now Provincetown just inside the tip of Cape Cod on 11th November. After some weeks exploring the cape area, the colonisers considered it unsuitable for settlement. On 20th December they moved across the bay to what is now Plymouth. There they found evidence of extensive occupation but no natives in sight, The Pilgrims saw this eerie vacancy as a gift from God and they decided to make their settlement there, commencing the building on December 25th. What they did not know was that infectious disease(s) had so stricken the large native community that they had taken flight, The Pilgrims themselves had to contend with disease which, coupled with the harsh cold and shortage of provisions, wreaked a dreadful toll, with only half of them still alive at the end of winter. However, the survival of these few against near impossible odds led to their story becoming a central theme in the history and culture of the United States.

It is revealing to trace what happened to the Speedwell. She was refitted and had a long service life, apparently without leaks. It seems likely that the ship was deliberately sabotaged by members of the crew, possibly to avoid a hazardous double crossing of the North Atlantic in winter.

Dartmouth, together with eleven other English towns with Pilgrim connections, is commemorating and celebrating this significant event. The Separatists’ “Compact” was the first, and only, social contract in North America, explicitly binding the Pilgrims one to another, and their social ethics became the basis of the US constitution and identity. It forms an important part of the ‘special relationship’ today.
Dartmouth Museum and the Dartmouth Mayflower 400 group, which the Museum helped establish, have jointly initiated and invested in projects that will have a permanent positive impact on both the community and visitors. The Museum has a Mayflower Exhibition telling both the light and dark aspects of the story. A 10 foot Replica Model of the Mayflower, built by a team of local volunteers, is the Centre of Attraction. Film and video will help to tell the story. There is also a large new painting of life in Dartmouth in 1620 and historic figures and artefacts. A dedicated team has created 3 new historic Mayflower 1620 related trails in the town, incorporating a sculpture of a Pilgrim figure on which local schoolchildren have helped, and an educational book with Mayflower stories written by local schoolchildren.”
Click here for more information on other DM400 projects. 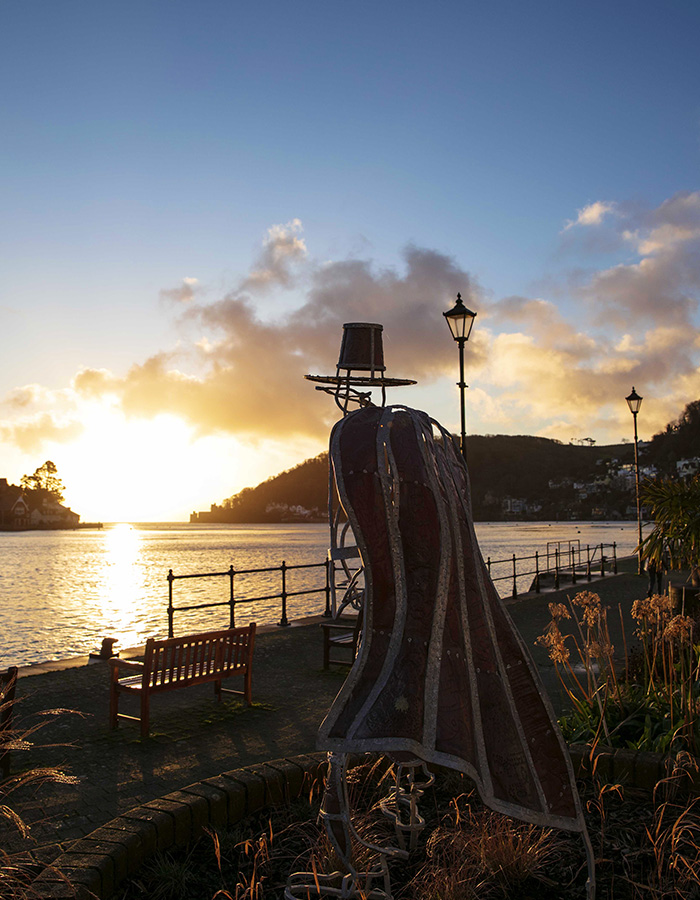