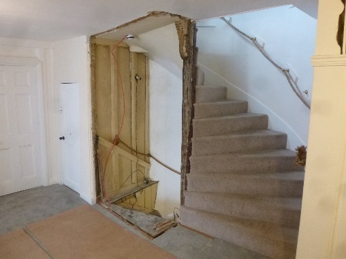 Following last year’s signing of the lease to extend the Museum upward into the former domestic flat above it, we (and the Council) have had the delicate task of breaking through a 20th Century false wall in the 17th Century Grade1 listed building. The wall had boxed in the top of the spooky spiral stair leading up from the Museum and had been expertly constructed so that, from within the flat, there was no evidence of a downward stair. Within the exposed stair top there was early electric copper covered cabling, fortunately not live. This has been removed and the area made good and redecorated. The rope handrail has been retained; it is considered appropriate in a nautical museum.

Important Information about dispatching your order

When ordering from our shop, please be advised that we dispatch orders received usually once a week on a Friday.

If your order is for a special gift where timing of delivery is urgent, please email and we will do our best to accommodate your request.

We are team of volunteers and appreciate your understanding.