Keep up to date with all the latest news!

His Royal Highness The Prince Philip, Duke of Edinburgh visited Dartmouth many times of which the first and perhaps best known was for his own time at Britannia Royal Naval College in 1939 during which time he met the young Princess Elizabeth and before he went to sea and to war as a Midshipman.

He joined Princess Elizabeth in 1949 when they visited to open the first short stretch of College Way which came past the end of Ridge Hill to go to the then entrance gates to the College.  In 1954 he came on his own to dedicate the memorial – on the Embankment – to the troops who left Dartmouth for Normandy on D-Day 1944 – the Mayor at the time was Cllr Mrs. ‘Dolly’ Holwill.  Another solo visit was in 1958 when he presented new Colours to the Naval College and in return was given a very special present; two traditional green gurgle jugs commissioned from Dartmouth Pottery with his royal cypher on one and the Queen’s EIIR on the other.  Only 8 sets were ever made of which one set is in the College and Dartmouth Museum holds another.

A visit – this time with the Queen – was in 1962 when they both visited the College and were shown around town.  There have been a number of visits since then.

Dartmouth Museum cherishes the photographs and archives of these very special visits and celebrates the talents and achievements of an extraordinary man.

THE MUSEUM WELCOMES THE MAYFLOWER MODEL

The model is now in our Mayflower Exhibition Room! It’s all hands on deck for the team as they continue to finish this new exhibit before re-opening.

The Museum Welcomes the Mayflower Model From its workshop, we are extremely excited to welcome the...

CARRY ON MAYFLOWER 400 MODEL! SHIELDING AND VULNERABLE ANCIENT CREW, having been locked out of the... 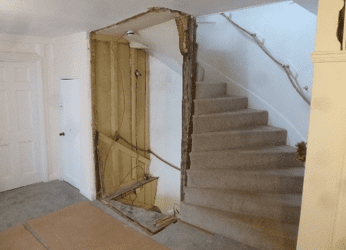 Museum Break ThroughFollowing last year’s signing of the lease to extend the Museum upward into...

Mayflower Exhibition PlannedWork has started on an exciting new Mayflower exhibition in the...

Please get in touch with any enquiries.