This room is themed on the social and physical development of the town. It is named after the leading family of the town who provided the Mayor and Member of Parliament during much of the 19th Century. On show are a uniform and a lady’s dress which belonged to the family.

Beside the Holdsworth memorabilia there is a wealth of information and artefacts from as early as the Neolithic, leading to cannonballs, coins, pipes, buckles, medals and love tokens. These last items from the 18th and 19th Centuries were bent or defaced coins, stamped or engraved with initials, given by young men to their wives or sweethearts before going on a perilous journey from which they might not return.

There are maps and descriptions of the town’s development from the 14th Century, when a causeway was built across the creek to link the settlements on either side and form a mill pool. Although the causeway as a feature has long since disappeared as the town has spread across pool and further out into the estuary, its line is still there today as Foss Street and walkers can relive the crossing from Hardnesse to Dertemouth. The extent of the reclamation forming Dartmouth can be judged when walking around the town in that anywhere that is flat was once wet with the tide.

Until the mid 20th Century there was widespread demolition of buildings considered Insafe or too old or in the way. An iconic photograph depicts St Saviour’s Court, once a collection of timbered buildings round a courtyard by St Saviours Church. At this sanitising distance in time, it has considerable architectural and historical interest. In 1935 the authorities considered the Court, occupied by coal lumpers and other poor families, to be overcrowded, unhygienic and a slum without merit. So it was demolished. Had it still been standing just a quarter of a century later, a heritage organisation would have stepped in to have it fumigated, repaired and saved for visitors to marvel at its bits-added-on architecture, the cramped conditions the poor lived in and the lack of sanitation.

In a corner of the room is a fine dolls house, modelling some of the rooms of Oldstone Manor, which stood near Blackawton. This building had a dark history. It burnt to the ground in 1895 following a notorious murder, which has the characteristics of an Agatha Christie mystery novel. The body of the daughter of the house was found standing upright and fully clothed in a pool on the estate, with her hat still on her head, just below the surface of the water. Unfortunately, there was no concluding chapter and the murder remains unsolved. Setting aside the dark past the visitor can marvel at the high standard of modelling in miniature; the Singer sewing machine in the kitchen and the birdcage in another room being worthy of special note. 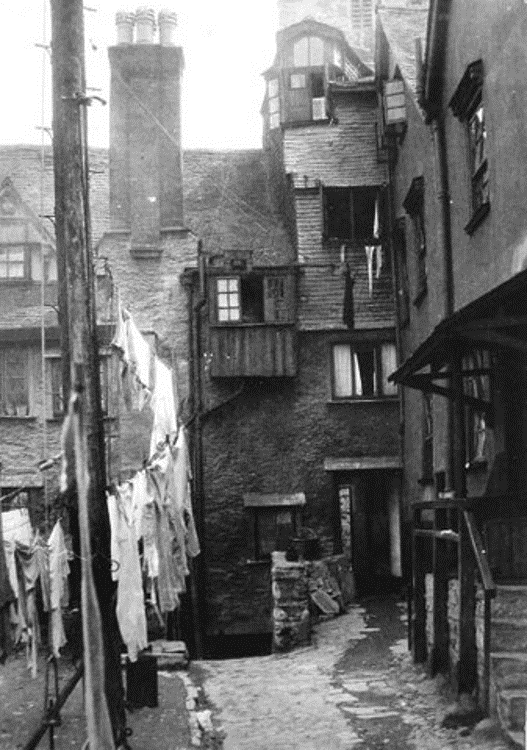 The stocks on display were at the medieval centre of the town at the junction of Smith Street and Higher Street, together with the pillory. On the Henley Study page there is a drawing made by Henley of the pillory in use.

The large key and its accompanying lock were from the Town Gaol, a small detached building which stood in the now widened part of Anzac Street fronting St Saviour’s Church.

Nearby can be discovered an exquisite Chinese ivory carving of a houseboat boat with possibly a tea ceremony taking place on the lower deck. A couple in expensive clothes are being attended by two servants.

At the start of the 19th Century the Newmans – one of several important local families trading across the Atlantic and into the Mediterranean and bringing wealth and jobs to the town – owned this Chair. After two centuries in his family’s possession, Sir Geoffrey Newman donated it to Dartmouth Museum. After careful renovation, in 2017 the chair was paraded with due ceremony around the town, the procession having the Mayor, the Town Crier and other dignitaries in attendance. It was then coaxed, with some difficulty, into the Museum and its showcase in the Holdsworth Room.

This video is courtesy of the BBC – all rights reserved.