This, the main reception room of a rich merchant’s house was reputed to be the finest in the town in 1671.

In July 1671 King Charles II, an inveterate yachtsman (he had 26 royal yachts in his 25-year reign), was returning to London in the royal yacht Cleveland* from a visit to Plymouth. It had been hoped that the King would call in to Dartmouth, but he continued past the town. However, he was beset by storm and forced to run before the wind and take shelter in the Dart estuary. The Corporation, delighted by this unexpected visit, lavishly entertained the King to lunch in arguably the best room in the town, with its fine panelling and ceiling. The royal coat of arms was placed above the fireplace to mark the King’s visit.

* It is said that the King’s yachts were named after his mistresses, of whom there were many.. The Cleveland was named after Barbara Villiers, Duchess of Cleveland, a noted beauty at court.

The wainscot panelling, frieze and ceiling of the King’s Room are original and an important part of the Butterwalk’s Grade 1 listing. The motifs of mythical beasts of the frieze are repeated but are not exactly the same, showing that the carving was not done to a template but with freer expression. 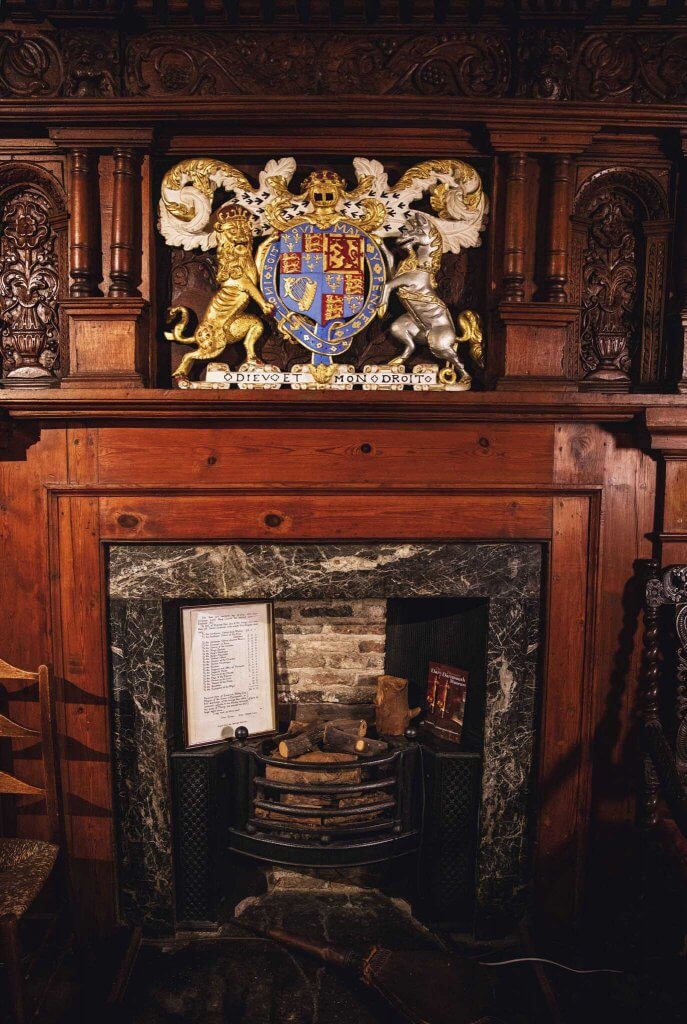 A problem that had to be overcome by the designer and cabinet maker when the museum displays were updated in 2010 was that there is hardly a true vertical or horizontal or right angle anywhere in the building. This is the consequence of extensive subsidence following the Butterwalk’s construction out on the mud of the estuary in 1640. The slope of the floors from front to back of the building is particularly noticeable

The King’s Room has a fine collection of ship models, paintings and drawings relating to the town’s maritime history. There is a time sequence of ship models round the walls of the room. The first model is simply made and possibly stylised but has educational value. It is a Crusader warship. It has a raised forecastle and sterncastle with battlements but no gun ports in the hull. The substantial Crow’s Nest has room for several archers. There is no rudder for steering but a ‘steerboard’ towards the aft on the ‘starboard’ side. To avoid damage to the steerboard the ship would lay the ‘ladderboard’ or ‘’larboard’ side against the quay. Confusion between starboard and larboard, especially in a gale, resulted in the latter being supplanted by ‘port’.

The models in the King’s Room are primarily of wooden-hulled ships, some of the very highest quality of craftsmanship. Ironically, arguably the two ships most associated with Dartmouth, the Britannia and Hindostan, which served as bases for training naval officer cadets before the Britannia Royal Naval College was built, are not in model form but in paintings. There is a fine copy by Fothergill (1880) of the iconic watercolour by the ‘Painter of Light’, JMW Turner.

It would be expected of a maritime museum that there would be an example of scrimshaw and there is, but perhaps even more impressive are fine bone carvings by Napoleonic French prisoners of war incarcerated in the remote Dartmoor Prison and hulks on the Dart. A miniature domino set and the hull of an equally small galleon show remarkable steadiness of hand. 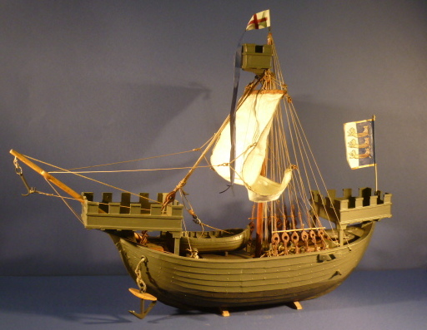 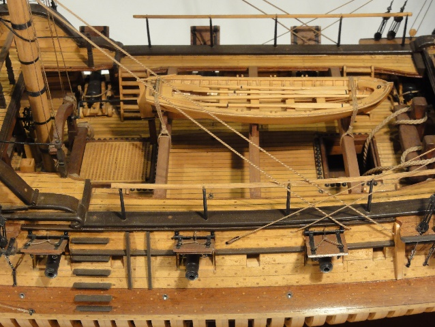