The Jesse Room is part of the Museum but remote from it, being the main room of the westernmost house of the Butterwalk. This is where the archives are held and worked upon. It is called the Jesse Room because of its extraordinary unique ceiling of plaster imagery in high relief, displaying the Tree of Jesse.

The representation is of the ancestry of Christ, through his decent from Jesse, the father of David, in the form of a branching tree. This symbolic depiction of Christ’s ancestry, which became common in the Middle Ages, is the first expression of a ‘family tree’. It takes its inspiration from a passage in Isaiah 11.1: 2, “There shall come forth a shoot from the stump of Jesse and a branch shall grow out of his roots.” Jesse himself is depicted reclining at the bottom of the picture, leaning on a skull, while the tree grows out of his side. The tree winds its way upwards through many generations and branches to culminate in the image of Christ and his mother.

Jesse Trees are found in many forms – in manuscripts, paintings, stained glass, stone sculpture, wood and ivory carving – but not in plaster. This plaster Jesse Tree is thought by scholars to be unique. It is interesting to note that the modern family tree representation, unlike the Jesse, has the distant ancestor on the top.

Over the years the Jesse ceiling has twice been close to being lost. The first time was in 1646 when the ceiling had been in existence for just a few years. When Fairfax recaptured the town for Parliament, Roundhead iconoclasm resulted in defacing of imagery in St Saviours Church, but the Jesse ceiling was spared. Perhaps because it was a private property or perhaps it did not come to their notice? The second near loss of the Jesse ceiling was in the WW2. Much of the ceiling was brought down by the nearby bomb in 1983 but the Borough Engineer carefully collected all the pieces, compared them with drawings, numbered them and put them in straw in boxes, to await restoration after the war. This meticulous care saved all but two representations, which have been deliberately left unrestored. 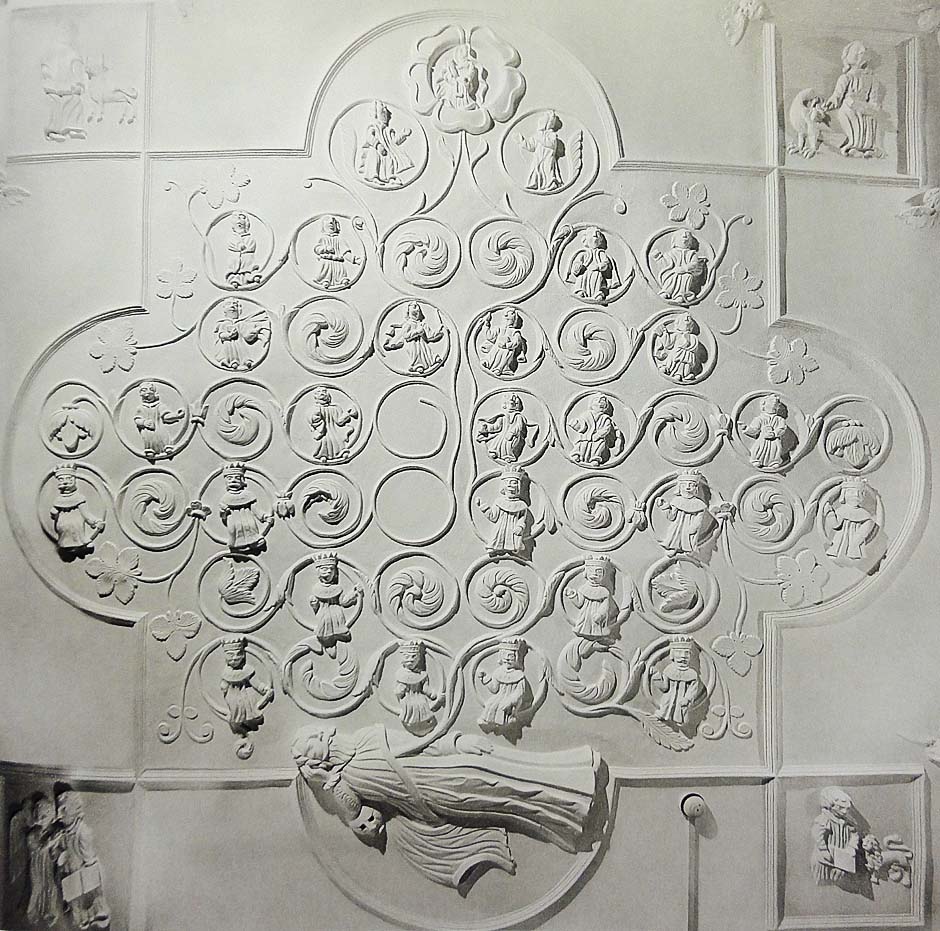